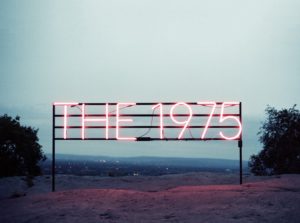 I’m extremely thrilled to share you the new single of The 1975! The lads of Manchester have worked hard on the new album, I like It When You Sleep, for You Are So Beautiful Yet So Unware Of It (which will be released on the 26th of February). Frontman Matt Healy told last year in an interview with music blog Music Feeds, that they would spend the whole year (2015) working hard on the new record. He already explained back then: ““We’re from Manchester, Macclesfield, and the first record was about the rain, and this second record is about not being in the rain and doing whatever the fuck you want in the sun.” Sounds quite exciting, isn’t it? 🙂

‘The Sound’ is a bit different than the band’s previous singles like ‘Ugh!’ and ‘Love Me’. These 2 were much rock, while the vocal melodies of ‘The Sound’ is way more catchy and funky. “Well I know when you’re around, cause I know the sound, I know the sound of your heart” is that moment when Matt starts with the intro, you completely fall in love with the track.

Although I like their previous work with singles like ‘Girls’ and ‘Chocolate’, which were definitely more indie-rock, I like the path that they took with the new record. The band already had a huge fan base, but I think that with ‘The Sound’ they will even make more friends.

Wanna check The 1975 live? You can find all tour dates here!