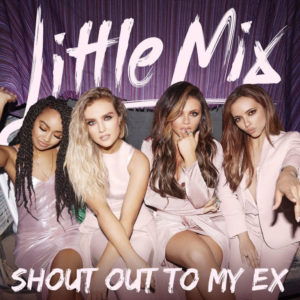 In case you haven’t been on social media this weekend, you were totally missing out something! Yesterday Little Mix made their comeback on The X Factor with their new single and girlpower anthem ‘Shout Out To My Ex’. As you can assume, it’s a heartbreak song, but with a happy twist.

Although the song got mixed reviews (some people were claiming that the song was a rip-off from GRL’s ‘Ugly Heart’), I think it’s still a fun song that a lot of people can relate too. Shout Out To My Ex’ is Little Mix’s first single of the new album Glory Days, which will be released on November the 18th. I AM SO EXCITED!!!

For the album the girls worked with Meghan Trainor, produced some songs with MNEK and even Charlie Putt wrote a song for the ladies. According to Jade, the album is filled with brilliant pop-songs:  “There’s this one song that I think our vocals are just, like, crazy. The only way is up – we’ve never really dipped. I feel like we’ve kept this progression, but we’re still striving for more,” Leigh says. “Hopefully this will be the album where we just go BAM! and explode. It’s everything we want in life.”

What do you think of Little Mix’s new song? Watch it out!